Woodworm infestations are common in the United Kingdom, the climate is ideal, and many period houses contain old timbers that are favoured by these pests.

The woodworm is, in fact, the larvae of beetles that bore into wood, they’re found both in the structure of a home and also in furniture.

This page forms part of our guide to pest control prices and is all about woodworm treatment costs and options you can consider, including DIY.

Woodworms are seasonal, and these pests are more active from May to October.

The larvae spend up to 4 years in the timber before growing into a beetle, at which point they burrow their way to the surface.

They are attracted to light and infestations are usually found near the roof eaves, window sills and loft hatches.

How Much Do You Think Woodworm Treatment Will Cost?

We are researching how much consumers think some home improvement and maintenance projects will cost.

The question below is entirely optional, you can skip it if you wish.

What are the Four Most Common Types of Woodworm?

There are many different types of larvae and beetle, however, in the UK there are four variants that are prevalent; The Common Furniture Beetle, The Death Watch Beetle, The House Longhorn Beetle and The Powder Post Beetle.

The Common Furniture Beetle is the most common and damages much more than just furniture. Its natural habitat is behind the bark of specific trees, but it will also infect wood instruments, roof joists and decorative woodwork.

The Death Watch Beetle is native to the UK and prefers hardwoods that are old, rotten or softened by fungal growth. This pest is commonly seen in damp old period buildings in warmer parts of the country such as the south.

The House Longhorn Beetle is typically found in the south of the UK with significant infestations located in Surrey, parts of London, Berkshire and Hampshire. This pest prefers softwood timber.

The Powder Post Beetle is commonly seen in the UK and prefers hardwood timber such as Oak, Mahogany, Ash, Chestnut and Chestnut. They were given the name as they reduce timber into powdery sawdust.

Images of all woodworm variants can be found easily and quickly on Google Images. 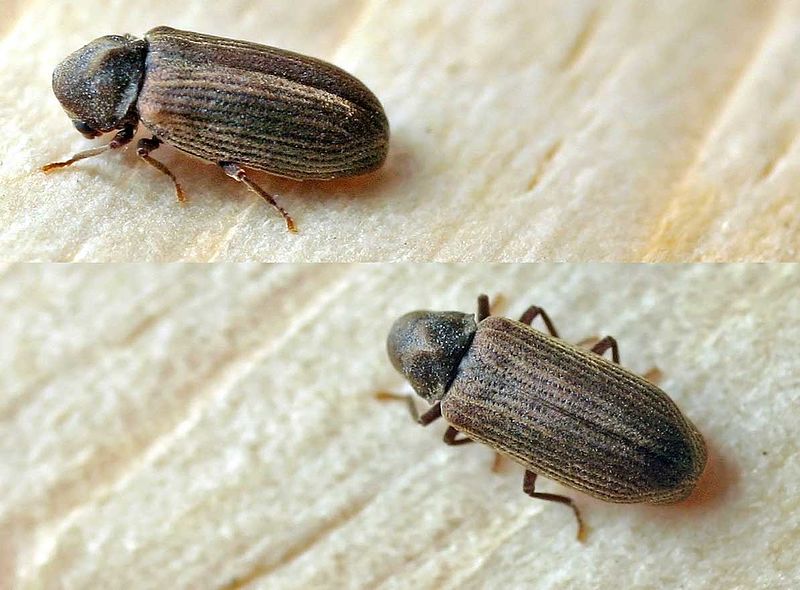 How Can I Diagnose Woodworm?

Your chosen pest control expert will diagnose woodworm by looking for exit hole in wood, fresh dust near the wood, crumbling weak timbers and live or dead beetles. These are all tell-tale signs of live woodworm activity.

Exit Holes – for the most common woodworm, these are around 1-2mm in diameter. Don’t forget that previously treated wood will still have holes in it, so you should look for fresh holes if possible.

Fresh Dust – during the active season, you can place sheets of white paper underneath the suspicious timber, and after a few weeks (sometimes days) you’ll see dust that is created when the beetle exits the timber.

Crumbling Weak Timber – the larvae consume the timber, and this will weaken it. Joists, floorboards and window sills may crumble when squeezed; this is a sign of a significant infestation.

Live or Dead Beetles – Beetles exit the timber during May – September, and you may be able to see them as they’re quite large. Dead beetles may fall from the timber and collect underneath it. You can use sheets of white paper underneath the timber to collect them for analysis.

Eggs and Larvae are usually only visible if you cut the timber. The eggs are white and small and are often buried deep in the wood. The larvae are grubs and look like small white; cream coloured maggots.

First things first; woodworm prefers damp timbers so you should first try to diagnose why the timber is damp and fix any issues you discover.

For roof timbers and ceiling joists, you should look at the roof and replace any broken tiles. For excessive loft condensation, you could look into roof tile vents or eaves vents.

If your timber window sills are infested, it could be because the roof gutters are leaking or overflowing onto the sill.

If your roofline fascia and bargeboards are affected, it’s probably because they in an exposed location – you could replace them with a Upvc plastic version.

If flooring, skirting boards or any other timber at ground level is affected, you should get the house tested for damp and carry out any repairs.

As a general rule of thumb, it’s good practice to solve the underlying issue of why woodworm is thriving, rather than relying solely on chemicals.

Once the underlying cause has been addressed, you should implement a chemical treatment program, either via a professional company or if you are competent with chemical and insecticide safety, via the DIY route.

Permethrin is a water-based insecticide that is applied by sprayer or brush. The timber will absorb the liquid to a depth of between 2 – 5mm, the water then evaporates leaving the chemical behind which kills the woodworm on contact.  Permethrin works very well on the Common Furniture Beetle, but if you have an infestation of House Longhorn or Death Watch Beetles, you may need to inject a gel version of this chemical deep into the timber. Surrounding timbers should also be treated, even if they appear to free of these two pests.

Permethrin is toxic, and extra precautions should be taken when using this chemical indoors and especially in confined spaces such as a loft.

Boron is also used in many insecticides and is considered by some to be a safer option. The property only needs to be vacated for a couple of hours as the chemical has a low toxicity level. While Permethrin targets all crawling insects and is harmful to other species, Boron is more targeted and only affects insects that burrow into the timber. If you have House Longhorn or Death Watch Beetles, you’ll need to inject this chemical deep into the timber.

If the property is affected by a heavy infestation of woodworm, the strength of some of the timbers may be compromised and will need to be replaced or additional supports installed.

Option 3 – Is There a More Eco-Friendly Way to Treat Woodworm?

If you don’t want to spray or brush chemicals onto the timber because of safety concerns, you do have a few options; these include ultraviolet treatment, a chemically infused sticky tape can be used as they’re less toxic. You can also replace the affected timbers and separate them from existing timbers with a barrier such as plastic.

As previously stated, find the initial cause of the infestation and complete any remedial work, also replace any timbers that are infected.

For timbers that can’t be replaced, you can install ultraviolet insect killers to eliminate the beetles as they exit the wood during their active season (May-Sept).

You can also set chemical sticky traps during the active season, these are less toxic as the chemical is contained within the trap.

For furniture, you can brush Boron onto the timber, allow it to dry and then seal the chemical inside the wood by painting over it with a varnish or other waterproof sealer.

Unfortunately, none of the options above is as effective as a chemical treatment.

A typical loft above a 3-bedroom semi-detached home can be treated with Boron or Permethrin for around £450-£850.

The price varies and depends on the type of business you instruct to do the work.

If the timbers need a chemical injection rather than a spray-applied treatment, expect the cost to rise substantially as the work will take twice as long.

How Long Does The Work Take?

If possessions are removed from the loft, a typical loft above a 3-bed house can be treated in about half a day.

If you want the pest control company to remove and replace all the possessions and/or you have walking boards that need lifting and resetting afterwards, then expect the work to take around between one and two days.

The cost to treat woodworm under floorboards will depend on whether the house is empty or full of possessions, how many rooms are affected and the type of flooring that is in place. It will almost certainly cost more than a loft treatment.

For DIY applications we recommend Boron, it’s safer, isn’t as toxic to pets and you can re-enter the loft/room after about an hour or so.

The cost of Boron for a typical loft space above a 3-bed semi-detached house is around £80.

A mask, overalls, and a 10-litre knapsack sprayer cost around £50.

This website sells Boron and has suggestions for how much you’ll need.

The vast majority of woodworm infestations can be treated with either Boron or Permethrin; these can be spray or brush applied. The cost of treating a typical loft above a 3-bed semi is around £450-£850. Small local traders are cheaper than a national company.

If you have an infestation in or under floorboards, the cost may be higher.

If your property is infected with Death Watch or House Longhorn Beetles, you may need to have the timbers injected with the chemical and that will cost more and should be done by a professional.

DIY treatments for the most commonly found woodworm do work and many homeowners choose to treat the wood themselves to save money.

Rentokil is a well known brand in the UK and while their prices tend to be at the top of the scale, they do offer long guarantees.

Permagard sells products directly to the public and they’re also a well-known brand.

We always recommend getting at least three written quotes for projects like woodworm treatment.

Hit button below to see how we can help you:

This guide was written by Danny Woodley and was last updated in May 2021.

Cost to Keep a Dog in the UK

The Most Powerful Moss Killing Chemical You Can Buy