Wall ties are installed in most homes that have a cavity – a gap between the inner and outer wall. Wall ties hold the two walls together and prevent movement and collapse. Unfortunately, some homes in the UK were constructed without adequate ties or over time, the ties have failed and need to be replaced.

Wall ties can be inspected and the process is fairly straightforward; first, the wall ties are located with a scanning device similar to a metal detector, then small holes are drilled into the cavity between the two walls and a camera with a light is used to record the condition of the ties. The external walls around the ties are also inspected for any signs of movement or cracking. Usually, only a few ties are inspected and their condition will be the same as all the others on that wall.

Lots of companies offer free wall tie surveys but none will be independent as they will all offer wall tie replacement services. This conflict of interest can be an issue as the surveyor is also the seller, hence why customers should ask to see evidence of wall tie failure or corrosion.

Independent surveyors will normally charge anything from £250 to £1000 for a comprehensive wall tie inspection report which could save you money if your wall ties don’t need replacing but will add to the cost if they’re faulty.

We suggest selecting a local firm with a good track record that offers free or low-cost surveys and ask them to provide evidence on the condition of the wall ties.

Depending on the findings of the report, you’ll probably have one or two options:

The cost of the project will depend on several factors such as; the size of the property, access requirements, the type of tie that needs to be replaced and the type of wall.

The wall tie prices below are a general nationwide guide to the cost you can expect to pay as of 2022:

Scaffolding: Many wall tie projects can be completed from access towers or other equipment that the installer owns. More complex projects or those with access difficulties may require scaffold for at least part of the project, this will add to the cost of the works and isn’t included in our price guide above.

Exterior painting: The figures also include making good the exterior wall but exclude painting (for example, you may wish to completely paint the exterior render to hide where the holes were drilled).

Location: The prices displayed are averages, you may pay more in London and the southeast while those living in the North may pay slightly less than the stated figures.

The size of the project: As with many building and repair “jobs”, the economics of scale mean that smaller projects cost more per square metre than larger projects. If you have only 3 square metres of wall that require remedial work, it’s unlikely that you’ll find someone to do it for £30 psm but if you have 200+ metres of wall, then you’ll probably pay around this, maybe less

If the surveyor’s report indicates that the existing wall ties are in good condition but there aren’t enough of them, then extra ties can be installed to secure the wall.

However, if the existing ties are faulty or are showing signs of corrosion, they should be removed and replaced, this involves much more work, hence the higher price.

Rusty wall ties will expand, creating gaps in the wall where water may enter and further corrode the tie. This can lead to larger cracks in the wall, movement and eventually complete failure of the ties and in extreme cases, a collapse of the wall.

In most cases, faulty wall ties will need to be removed and replaced as simply adding extra ties will be insufficient.

How Are Wall Ties Replaced?

First, a detector is used to locate all the ties, there are usually hundreds of them even on a small property.

Next, a drill and other tools such as a hammer and chisel, are used to cut out the old tie from the outside of the property.

A new hole is then drilled through the centre of the brick, through the cavity and into the interior block wall. A tie is then inserted and tightened.

The holes are then filled with a waterproof material and colour matched to the exterior wall as best as possible.

This process is then repeated on all the walls of the property.

How Many Wall Ties Are Required and How Long Does the Work Take?

On masonry walls, two and a half ties should be installed per square metre.

A typical 3-bed semi-detached property will take around 2 – 3 days to complete.

There are several reasons why wall ties may fail or may not be doing the job they were meant to do.

Wall ties create a bridge between the inner and outer walls of a property and they have the potential to transfer rainwater to the inner wall.

If the external wall has cracks or is subject to high levels of wind-driven rain, moisture can travel along the tie to the inner wall where it then soaks into the plaster.

Wall ties should be installed on a slight tilt so any water flows outward towards the outer wall.

Incorrectly fitted wall ties can lead to damp problems on plaster and should be replaced.

As the metal corrodes, it will expand which causes cracks in the walls and can even lift window lintels and cause other damage.

Even if the damage looks mild, rusted ties should be removed before they can cause more severe problems. 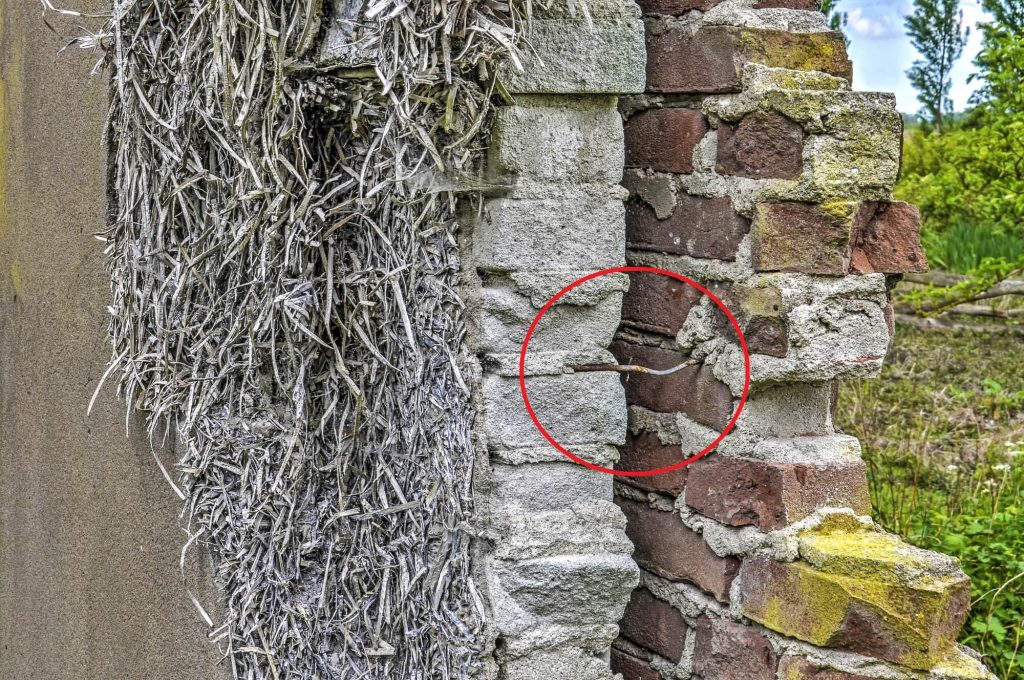 It’s not unusual for incompetent bricklayers to miss wall ties when constructing walls and this can cause problems in the future, such as cracking, movement or even the collapse of the wall.

The wall should be scanned with a detector and if too few ties are found, extra ones should be installed.

Get a Price For Extra or Replacement Wall Ties

Tap the button below and fill out the form to get a quote for wall ties:

The Wikipedia article is currently in-depth and clearly written by an expert.

This video compares new and rusted wall ties and offers an explanation of why they rust.

Why wall ties fail and photos of the effects.

Discovered problems with your cavity wall insulation? This is how much it costs to remove it.