Are you seeing more and more foxes in your garden? I sure am and they’re getting bolder, with some even trotting around in broad daylight.

As you’re probably aware, foxes like to chew, dig and drop copious amounts of pungent excrement. They can also cause considerable damage to the garden, including to bins, hosepipes, plants and lawns.

These animals are also very territorial and if one fox is killed or removed, another will soon take over its patch.

There are a few ways gardeners can prevent foxes from even entering their property, all you have to do is read our guide and follow the step-by-step deterrent instructions on this page and try out a few fox repellents.

Soon, you’ll be free of these four-legged pests and you’ll be able to enjoy your garden once again.

The first step is to understand how foxes operate.

There is no doubt about it, foxes are crafty, intelligent and their entire genetic makeup is designed for one thing – survival.

They have great hearing, a powerful sense of smell and can run at over 22 miles per hour for short distances.

The urban fox does have several traits that you can use to your advantage though.

Foxes have bad eyesight. Their survival instinct also means that will avoid all dangerous situations wherever possible, this gives us insights into how we can scare them off.

The fox survives by staying away from confrontation and fearful situations. It’s a runner, scavenger and evader, not a brawling fighter.

I am sure you can see where we are going with this but please keep reading, we have some great ideas and products for you to try.

If you want to get rid of foxes, you need to make your garden less appealing to them.

There really is no other way.

To put it bluntly, the fox should feel very insecure whenever it enters your garden, so insecure that it will choose another garden or area instead of your property.

You need to use the fox’s natural nervousness and survival skills to your advantage – make it feel like any other route, any other garden, any other street would be safer than entering your property.

Don’t worry, we’re not asking you to rig your property with traps or explosives but there are some changes you’ll need to make to deter foxes from entering your garden.

Foxes will be entering/exiting your garden via several routes:

If you have a camera such as GoPro,  a car dashcam or something similar, you can set this up to monitor the garden. This will give you a good idea of where they’re entering your property.

Foxes are creatures of habit and a bit like cats, they will find their own routes if they prove safe, they’ll use them again and again.

To make it difficult for a fox to enter the garden, try these solutions:

Put humane spikes on top of walls and fences.

These products won’t cause serious harm to foxes or cats but they do cause discomfort and are an effective deterrent.

This product has a five-star rating on Amazon and hundreds of reviews.

The video below shows how this product works for dogs and cats.

It also keeps animals out too.

Here is a photo of a two-bar roller system, I’ve seen these installed in a garden where the owner wanted to let their house cats out into the garden but didn’t want them to escape; the rollers worked incredibly well and they can be used to keep animals out as well as in. 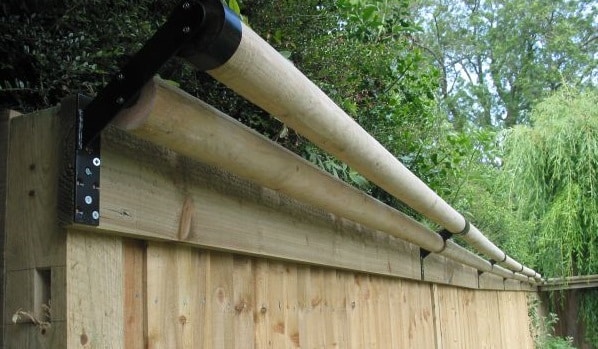 Cat containment devices can also be used to keep foxes out

If foxes are digging under walls and fences, you can secure the ground with a foot or so of concrete. Sand and cement aren’t expensive and you can start by only targeting the likely entrance points.

If you only have a small gate or doorway securing the garden, change it to a taller one and put spikes on top of it.

Step 3 – Light Up The Garden

Foxes prefer the darkness of the evening and nighttime, the last thing they want is a bright light suddenly and unexpectedly switching on.

Motion-activated outside lights are cheap and easy to install.

They also have the added bonus of deterring burglars.

This floodlight is currently on sale for around £20 and is eligible for free delivery.

These devices are awesome and will scare the hell out of any foxes that enter your garden.

Check out this 20-second video:

The system must be connected to a hosepipe, so it relies on your property having *good water pressure* from the mains.

The motion sensor is battery powered and works during daylight and at night when it’s dark.

When a fox, cat or other animal passes in front of the sensor, a 5-second burst of water is released.

The system then resets itself before waiting for the next target.

For maximum effect we suggest you reposition the product every few days to start with, just to confuse and startle the foxes.

Just to repeat: Foxes are adaptable but dislike surprises. If you leave this device in the same place, these creatures will find a way around it.

An alternative product that’s worth considering is the PestXT.

Here’s a photo of it in action, it’s very similar to the PestBye: 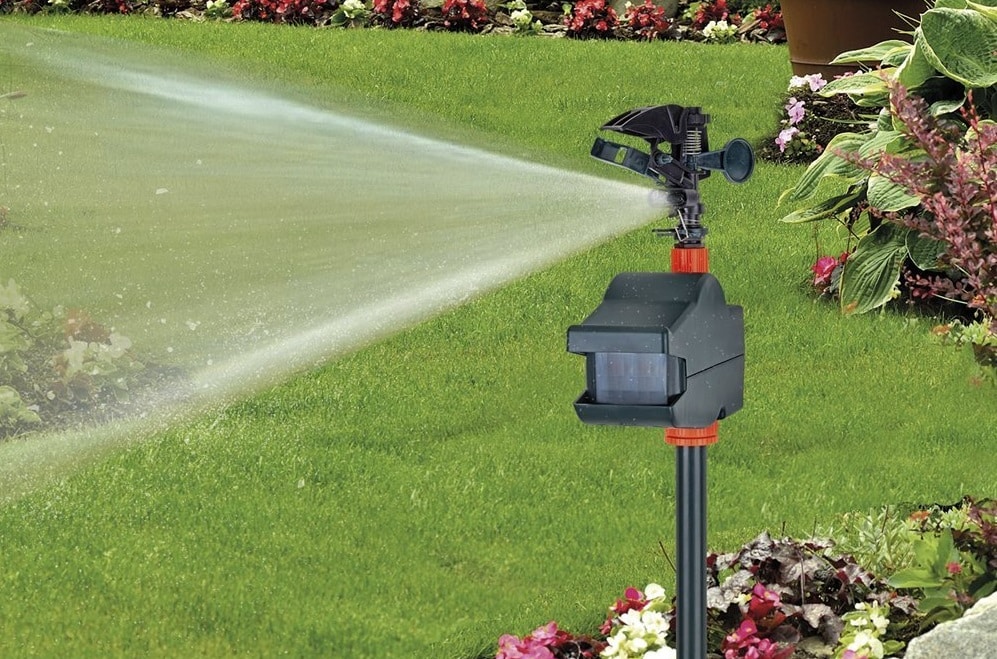 The STV International “Jet Defenders” is a similar product with similar ratings and product reviews.

Read Reviews of the PestXT Here

These repellers rarely work on their own – I know because I’ve tried several of them.

To get the best results, target them towards known entry and exit points rather than trying to cover the entire garden.

Most of the products on sale are battery-powered and we suggest you reposition them every week or so.

Ultrasonic repellers work by sending out a very high pitch noise that only animals can hear.

As previously stated, foxes will be startled by them at first and then may get used to them, hence the need to relocate them every week or two and combine them with other fox repellents.

Hit the button below to read reviews of this ultrasonic repeller.

So far we have suggested alarming the fox by hitting it with water and high pitch sounds.

The next product we suggest will attack the powerful sense of smell that foxes have.

Like the ultrasonic repeller, this product rarely works on its own.

But if strategically placed, perhaps under a bush or shrubland near a known entrance/exit point, it can help to deter foxes.

We also suggest you scoop up any fox excrement from your garden and treat the area with one of these two products.

Foxes have a strong sense of smell and replacing their poo with something that makes them feel uncomfortable can certainly help.

Scoot is a well-known product but don’t expect it to work over a large area. 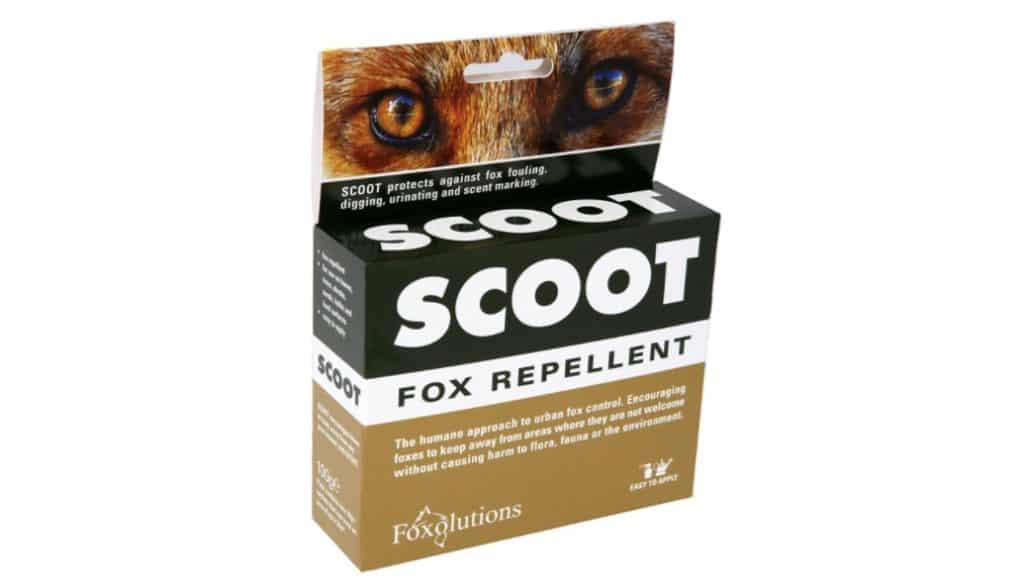 Another product you could try is the Inspired Fox Deterrent but again, don’t expect this to work over large areas. 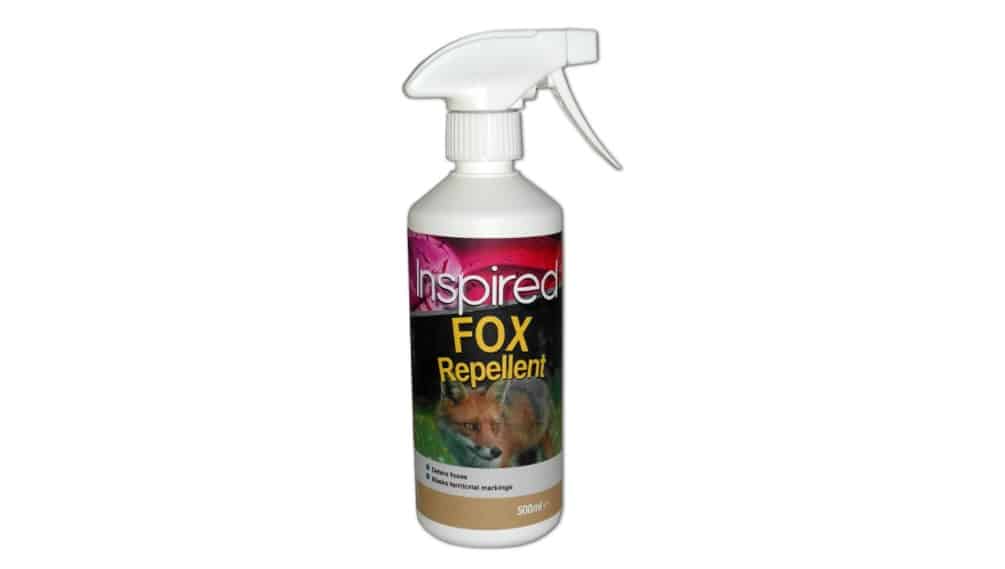 This prickle strip is simple, cheap and effective: 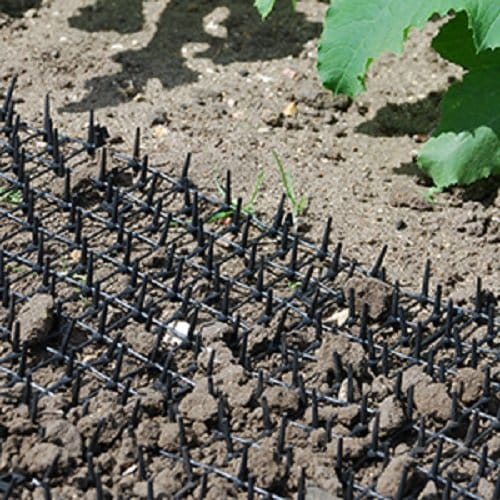 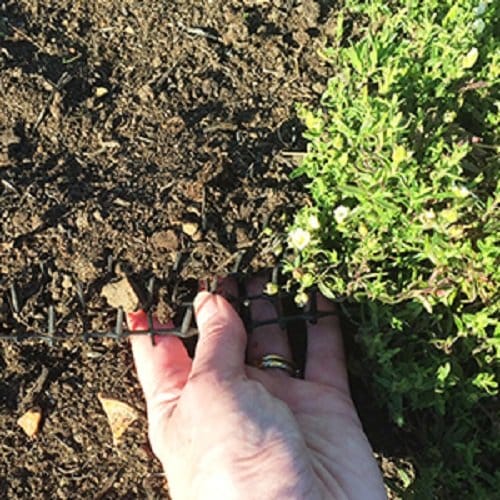 Conclusion – How to Stop Foxes Coming Into a Garden

To deter foxes from entering your garden, you should first appreciate that these animals don’t like to take risks, they will avoid areas that pose a threat or scare them.

You can expect it to take some time for the products we have recommended to take effect and you may need to reposition them every few days or so, at least for the first few months.

The blocking of entry and exit points is the key to a successful campaign against foxes.

Ultrasonic repellers and pungent foul-smelling products can complement physical barriers, water pistols and spikes but they rarely work on their own.

Yes but it’s unlikely that one product will work on its own.

In most cases you’ll need to try several products, relocating them to different places within the garden helps.

Blocking entry and exit points is probably the key to deterring foxes, you may need to set up a camera to check where they are entering the garden.

Can I Legally Kill a Fox?

Foxes are protected under several wildlife acts in the UK and cannot be poisoned, gassed, asphyxiated, maimed, stabbed, impaled, drowned or clubbed.

Penalties include up to a £5000 fine and up to 6 months imprisonment.

You don’t need to kill a fox, just deter them with our suggestions.

More information about foxes and the law can be found here.

Are Foxes Dangerous to Humans?

While fox attacks on humans have been widely reported in the media, they are, according to the RSCA, extremely rare.

Most attacks are due to fear and occur when they are cornered or panicked. Foxes will generally stay away from humans, the only exception is when they have been repeatedly fed by a human and have become accustomed to this behaviour.