Are you thinking about taking up skydiving as a sport but would like an idea of how much it costs? If so, you’ve come to the right place. I’ve done over 300 “jumps” so have a reasonable amount of experience.

On this page I’ll cover the following costs you can expect to pay to get into this sport: 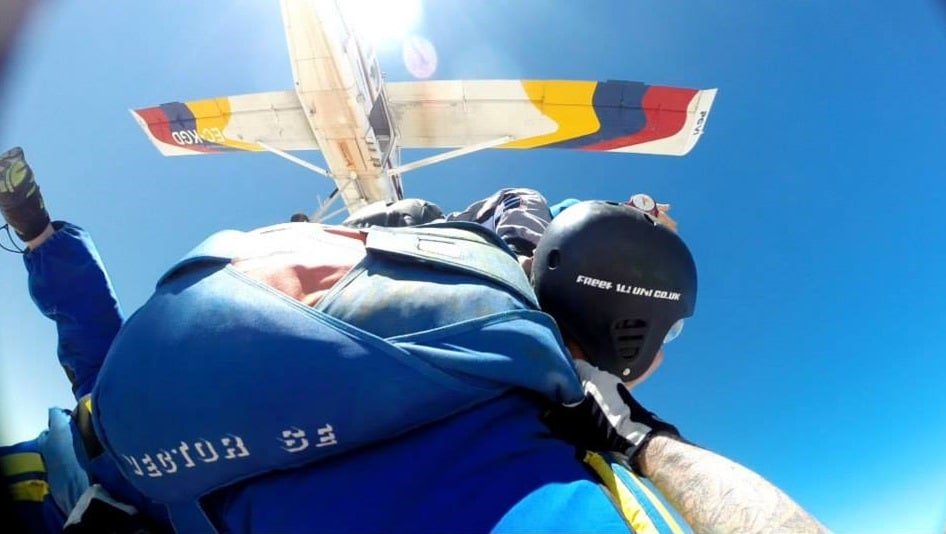 If you’ve never jumped out of a plane before, it’s a good idea to spend at least 15 minutes in a wind tunnel.

You’ll get the chance to feel what it’s like to have air rushing around your body at speeds up to 140mph.

Most tunnels offer specialist AFF preparation courses where you can practice the manoeuvres you’ll be doing in the sky.

While tunnel time may seem like an extra and unnecessary expense, it’s cheaper than failing AFF levels and having to retake them.

I’ve met several people who failed some of the more advanced levels and had to go in the tunnel to practice.

Expect to pay around £150 for enough time to get a grip on the basics of AFF.

You can, of course, spend much more.

An AFF course is the quickest way to progress and is the preferred option for most student skydivers.

Once complete, you’ll then need to do 10 solo “consolidation” jumps, each one will involve a specific task such as turning or backflipping.

All the equipment is provided during the AFF course, including parachute rig, goggles, suit and altimeter.

*Most people fail at least one level so do budget for this.

My second ever skydive with two AFF instructors, way back in 2014.

You’ll need to apply for membership of British Skydiving (affectionately known as BS) if you want to regularly jump in the UK.

As you gain new skills and qualifications, you’ll need to update your licence, there is a fee of around £15 plus postage stamps for this.

Most skydiving clubs also charge a yearly membership fee of up to £50 per year.

Expect to pay around £200 per year 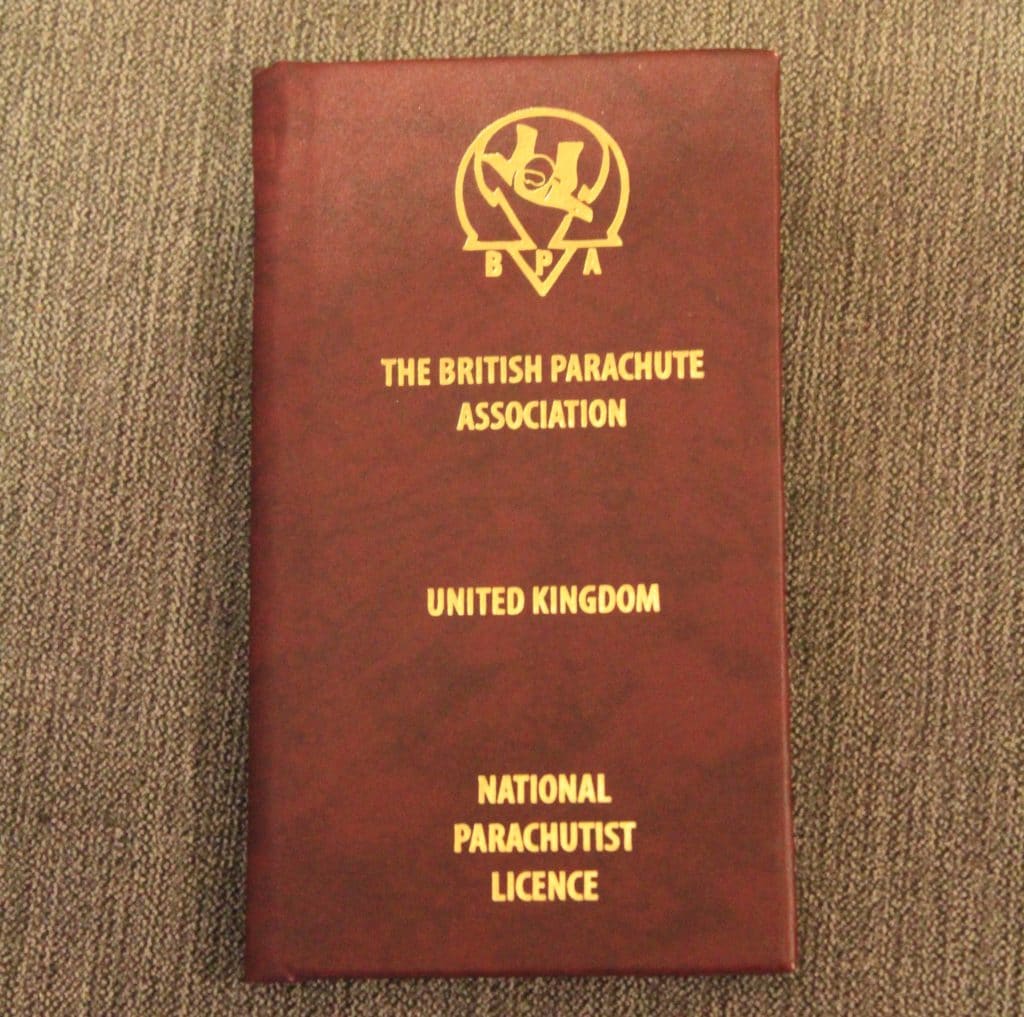 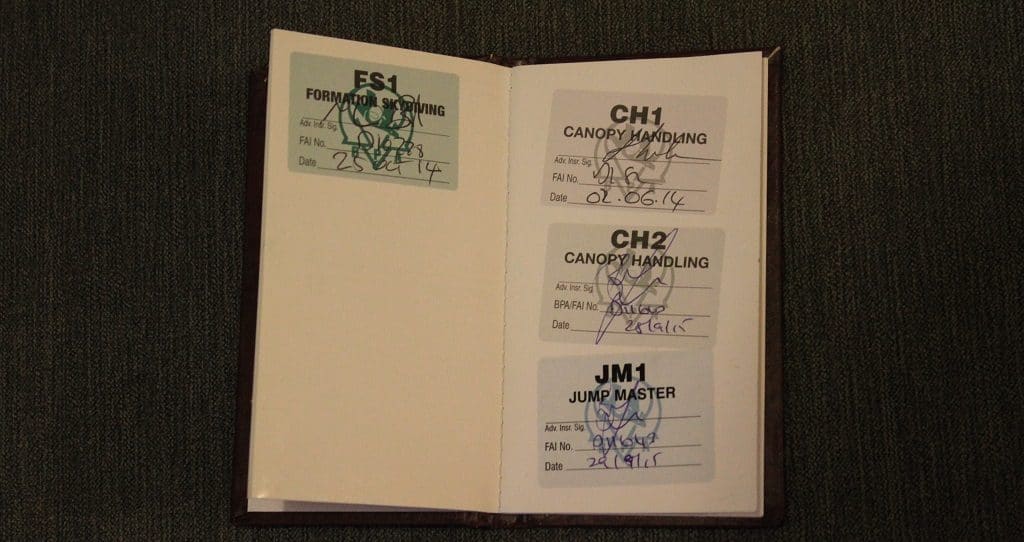 You should consider an additional policy, most basic injury policies start from around £150 but the cost depends on your level of cover.

Don’t forget that your policy should also cover you when jumping abroad.

This is the big one.

Buying new equipment is very expensive but you can buy second hand, there’s a thriving Facebook group where skydivers buy and sell all sorts of equipment from used rigs to goggles, altimeters, jumpsuits and helmets.

Keep reading to see why I don’t recommend hiring equipment beyond the AFF course.

What About Hired Equipment?

Hired equipment is perfect for students but not so great for intermediate skydivers, here’s why:

Is Used Equipment a Good Option?

Hired equipment is costly and inconvenient.

Brand new equipment is expensive and isn’t a good option for new skydivers as you’ll want to downsize your canopy after 50 jumps or so and it won’t be long before the canopy is too big for you.

Used equipment that has scope for canopy downsizing is perfect for those that have just passed their AFF course. You can do a couple of hundred jumps, downsize the canopy a few times and then sell the rig to someone else with little depreciation in value.

New equipment can take several weeks to arrive if it’s a stock item or up to 20 weeks if it’s custom made. Second-hand rigs can be purchased instantly.

This is another expensive aspect of skydiving.

The initial AFF course teaches you the basics of skydiving. Once licensed, you can safely and legally throw yourself out of a plane in the UK.

However, you’ll start your skydiving career as a solo skydiver and you won’t be able to:

Whatever you want to achieve in skydiving, it will involve training courses and practice jumps with coaches and instructors.

The most popular qualification after the AFF course is formation skydiving (FS) – this allows you to jump with others, initially in a group of up to four people.

Unfortunately, this is also one of the most expensive courses as you’ll need to do between 5-10 practice jumps with a qualified coach and also a few jumps with up to three other people. You’ll need to pay the cost of their jumps and fees for the coach.

How much you’ll pay depends on how quickly you pick up the skills required to fall safely in a group.

Spending some time in a wind tunnel can help you progress quicker but at an additional cost.

Tracking, wingsuiting and other courses and qualifications usually come later in your career.

One of my wingsuit flights

The average cost of a skydive ticket in the UK is around £20-£25 (exc equipment hire).

Most people take up skydiving after doing a tandem, which is a safe way to jump out of a plane. Tandems cost around £220, excluding camera or video footage.

Wind tunnel costs should not be underestimated, you can easily spend hundreds and even thousands of pounds practising manoeuvres in a wind tunnel.

Skydivers often arrange trips abroad as a group so factor in flights, hotels and other related costs.

As you progress through your career, you’ll want to periodically downsize your gear from large, safe parachutes that students and newbies use to smaller sporty ones that are more responsive and fun.

Tracking suits, wingsuits and jumpsuits can easily cost you several thousands of pounds.

Reserve parachute inspection and repacking should be done by a qualified rigger. Expect to pay around £75 for this, excluding the cost of any repairs.

Cost to Get Qualified and Complete Your First 150 Skydive Jumps

Here’s a breakdown of the costs you can expect to incur for your first 150 skydive jumps:

As you can see, skydiving is an expensive sport with high startup costs but much of the equipment holds its value well and can be sold on to recoup some of your money at a later date if needed.

You can save a considerable amount of cash by purchasing second-hand equipment – just make sure your rig has the scope for canopy downsizing.

Hired equipment is only suitable for students and the occasional skydiver. If you want to progress in this sport, you’ll need your own kit.

Wind tunnels are extremely expensive at around £600 per hour but once you’re qualified as a skydiver and have your FS1 (formation skydiving) qualification you can share the tunnel with up to 3 other people. Splitting the cost 4 ways makes the tunnel an attractive option for practising.

Is skydiving worth the investment?

Absolutely! Just look at the photos on this page; they are all of me.