Update 2022: As has been reported in the media and confirmed by our own research, the cost of home improvement projects and building work has skyrocketed over the last 18 months and unfortunately, chimney removal projects aren’t immune to these price hikes. The prices on this page were last updated in April 2022.

As I’m sure you can appreciate, chimneys come in all sorts of different shapes and sizes and some can be huge towering features that weigh many tonnes.

They can also be found at several different locations around the home, in the centre of a house, at the side or even joined with a neighbour’s chimney.

For these reasons, it’s very difficult to estimate how much it costs to remove a chimney without seeing it first.

The price guides on this page assume a small or medium-sized chimney that can be accessed fairly easily.

If that doesn’t describe your chimney, we suggest you get a written quote for the work rather than relying on our estimates.

On this page you’ll find:

Chimney Sections – Which Part Do You Want to Remove?

For all intent and purposes, there are three sections to each and every chimney.

Some homeowners choose to remove the stack from above the house and leave the chimney breast in place, perhaps as a feature of the property or simply because they want to save money by keeping costs down.

Others prefer to remove the chimney breast but leave the stack above the roof in place, this is usually done to free up space downstairs whilst also keeping a lid on costs. Planning permission rules may even require you to leave the stack in place, this depends on whether the house is listed and its location in the UK.

Some prefer to go the whole way and remove the lot, the entire chimney from top to bottom.

This page is all about chimney removal costs and the options you have.

Before you read any further, can you answer this one question?

We are conducting research into how much homeowners think certain home improvement projects will cost.

The question below is entirely optional but we are researching the difference between what consumers think projects will cost and how much they actually cost.

This a popular option for those that want extra space in their home or are redesigning the space. The image above gives you a good idea of what to expect; the chimney stack is supported and left in place while the breast is removed.

Removing a chimney breast like this isn’t a simple or quick project and it will require work over a few days, depending on the size of the chimney.

Your location in the UK will also affect the cost; labour is much cheaper in the North compared to London and the south.

For a builder and one labourer to do the work, you can expect to pay between £2250 and £3000. Larger businesses will obviously have more overheads so expect the cost to be upwards of £3500.

We haven’t included the costs of carpets, wood flooring etc.

Do bear in mind that in some circumstances, gallows brackets can’t be used and longer steel joists may need to be inserted to provide structural support to the chimney stack. This type of work varies in price and it’s impossible to provide an estimate without seeing the chimney first. 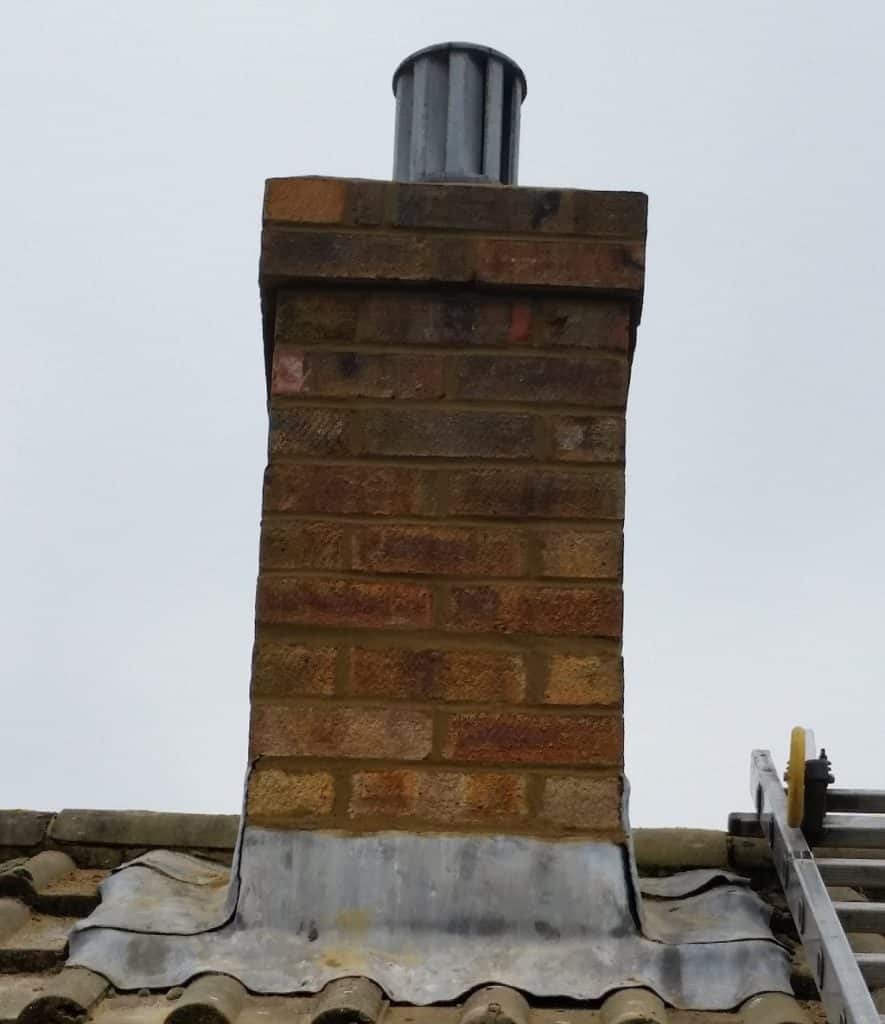 This option is normally chosen when the stack on a disused chimney needs to be repaired and it would be cheaper to just dismantle it to a point just below the roof tiles. The chimney breast is left in place and is often used as a decorative feature.

The photo above is of a very small chimney which could be removed within a few hours once access to the roof space has been gained.

Most small chimney stacks can be removed within a day and you can expect the cost to range from £600 – £1250. If your builder needs to bring in an external scaffold company then that cost will need to be added to the bill.

This option is chosen when you want to keep the chimney but plan to lower its overall height.

While the cost depends on the size and location of the chimney, most small and medium-sized projects can be completed in one day, you will be looking at between £500 – £900 in labour plus the cost of the scaffold, new chimney cowls may be needed (Colt Tops are £50 each) and repointing the brickwork as required will cost extra (see chimney repointing costs here as an example).

To lower a small chimney, you’re looking at around £1000 but the price can go much higher if the chimney is large or difficult to access.

Do You Need to Get Planning Permission To Remove a Chimney?

For the vast majority of chimney removal and alteration projects, you won’t need to apply for planning permission as this type of work falls under “Permitted Development” rules.

There are some exclusions to Permitted Developments, they only apply to houses, not flats or maisonettes. Local councils can also suspend them for specific areas such as a Conservation Area or World Heritage Site. Those living in a Listed Building may need to get permission before removing or altering a chimney.

If you’re not sure if you can do this type of work, we suggest you first visit the Planning Portal and also get in touch with your local council.

If you are removing or altering a chimney that is in contact with the wall which is located between your home and your neighbour’s home, you will almost certainly need to make a Party Wall agreement.

First, you’ll need to serve a Party Wall notice, you can do this yourself for free or get a surveyor to do it for you, the cost is usually between £100 – £150.

There are two possible outcomes to a Party Wall notice:

The prices for chimney removal on this page do not include the cost of Party Wall notices or surveyors’ fees. We’ve only provided details of what you could end up paying if your project doesn’t involve a party wall or your neighbour consents to the work.

Building Regulations are different to planning permission rules and you’ll need to adhere to the “regs” as done incorrectly, a chimney removal project could result in a collapse and cause injury or death.

There are six parts of the Building Regulations that apply:

Further information about Building Regulations for chimney removal projects can be found here.

It’s very difficult to estimate the cost of removing a chimney without seeing it first.

The width, height, location and material used in its construction all affect the overall cost. A very small chimney could be dismantled in 3 hours while a larger one could take 3 days.

The cost of scaffolding could well be higher than the cost of the actual work. Every chimney is different, however, and some can be easily accessed via a tower.

Party Wall agreements won’t cost you a penny if you get on well with your neighbour. If you don’t then surveyors’ fees can run into the hundreds and sometimes even higher.

If you have a very large chimney and you want to remove the breast but keep the stack, you may need to get a structural engineer to calculate the weight of the chimney, he’ll also specify the size of the RSJ (rolled steel joist) that would be needed to support the weight of the stack. Expect to pay anything from £150 – £300 for this calculation.

If you don’t want to remove your chimney, we have a separate page that provides guide prices for typical maintenance tasks such as sweeping, replacing the leadwork, installing cowls and repointing.

Get a Quote For Chimney Removal Work

If you would like a fixed written quote for chimney removal work, tap the button below to see how we can help you: