Is your home experiencing blocked drains or pipes? There are dozens of reasons why a blockage may occur and on this page, we’ll cover the most common causes and provide simple, easy-to-apply solutions.

If you’re on a tight budget, you should try these before calling out a pro.

On this page you’ll find solutions for:

The number one cause of blockages in the pipework beneath the bathtub or shower unit is hair and soap scum, which congeals in the plug hole.

To prevent hair from entering the bath or shower plug, try fitting a simple filter such as this one. They need to be cleaned every week or so but that’s easier and quicker than trying to unblock a plughole. For your shower, and assuming the hole is 2 inches wide, try the ShowerShroom.

Soap scum can be removed or dissolved by using a baking soda or vinegar solution that’s poured into the plug hole and left for a few hours. Boiling water also works well at dissolving fatty soap scum, so flush through the vinegar or baking soda with some hot water straight from the kettle. Commercial products are available from most stores but they often contain harmful chemicals that you don’t always need to use.

Any soap that isn’t dissolved by the baking soda or vinegar can be easily removed with this specialist brush that’s designed specifically for plug holes. I own one of these and they work great. They’re cheap, durable and you can use them in any plug hole, not just the bathroom.

Hair that is already in the plug hole can be removed with a wire bent into a hook shape. An old metal coat hanger is perfect for this.

Alternatively, use a specialist tool that has a grab hook on the end and teeth on the spine so you pull up any hair strands: 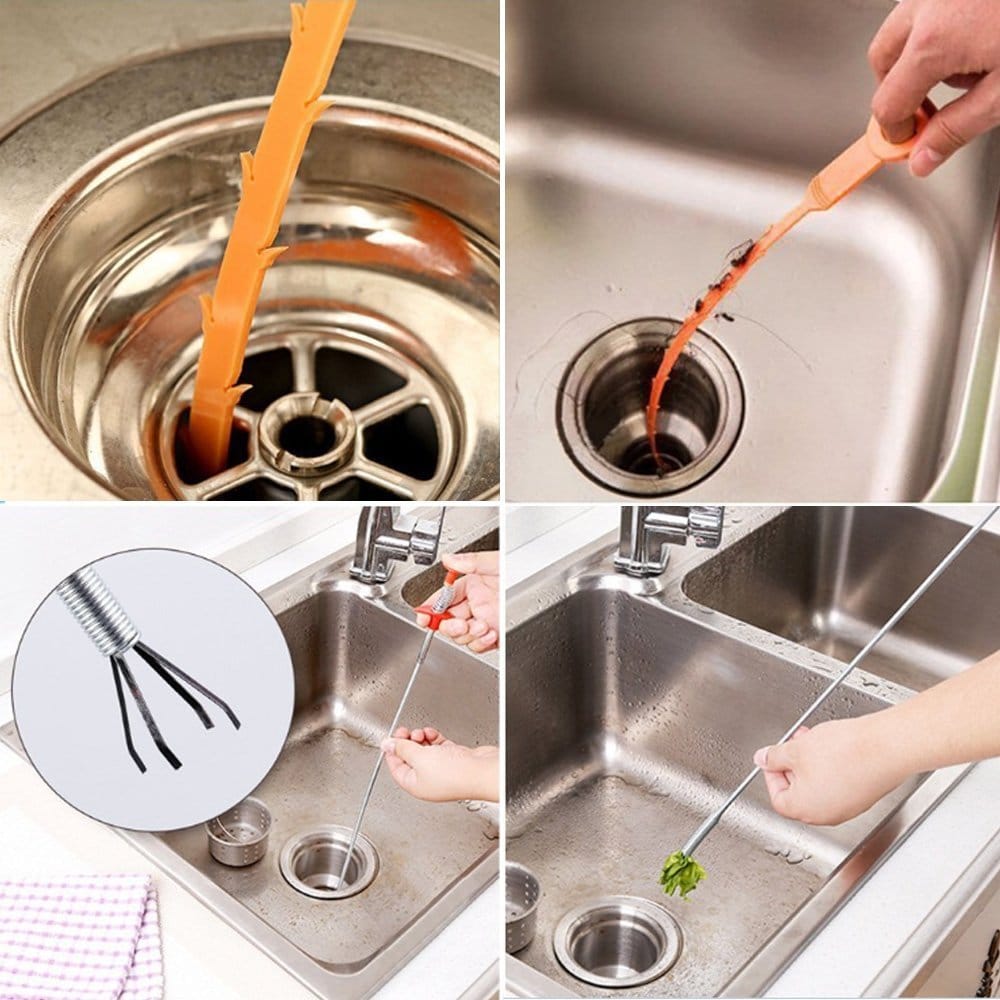 Limescale buildup in the toilet below the waterline and in the U-bend can result in tissue getting trapped and eventually causing a blockage.

Bleach does not remove limescale, it only removes the discolouration, leaving the limescale in place, although you won’t able to see it.

The easiest way to prevent tissue blockages is to periodically use vinegar, just pour a litre or two of cheap vinegar in the toilet and leave it for 12+ hours.

Alternatively, open up a bottle of Viakal and pour it down the toilet.

To clear existing blockages, pour washing up liquid down the toilet and once it has settled, pour in a kettle of boiling water. Washing up liquid is very slippery and acts as a lubricant, helping to clear tissue blockages.

Plungers work best when combined with lubricants such as washing up liquid.

Persistent toilet blockages are likely to be caused by one of these:

If you think your outside drain is blocked, see how much CCTV drain inspections and surveys cost here.

The number one cause of pipe blockages in the kitchen is fat and food leftovers being washed down the sink.

A drain filter should ideally be used in every kitchen sink, they work great and will prevent most blockages.

Also, keep an empty cardboard milk carton (or similar waxed container ) in the kitchen and pour any semi-cool oil leftovers into it, rather than pouring it down the drain.

For existing blockages, just open up the U-bend and unblock it manually, it’s a simple process: 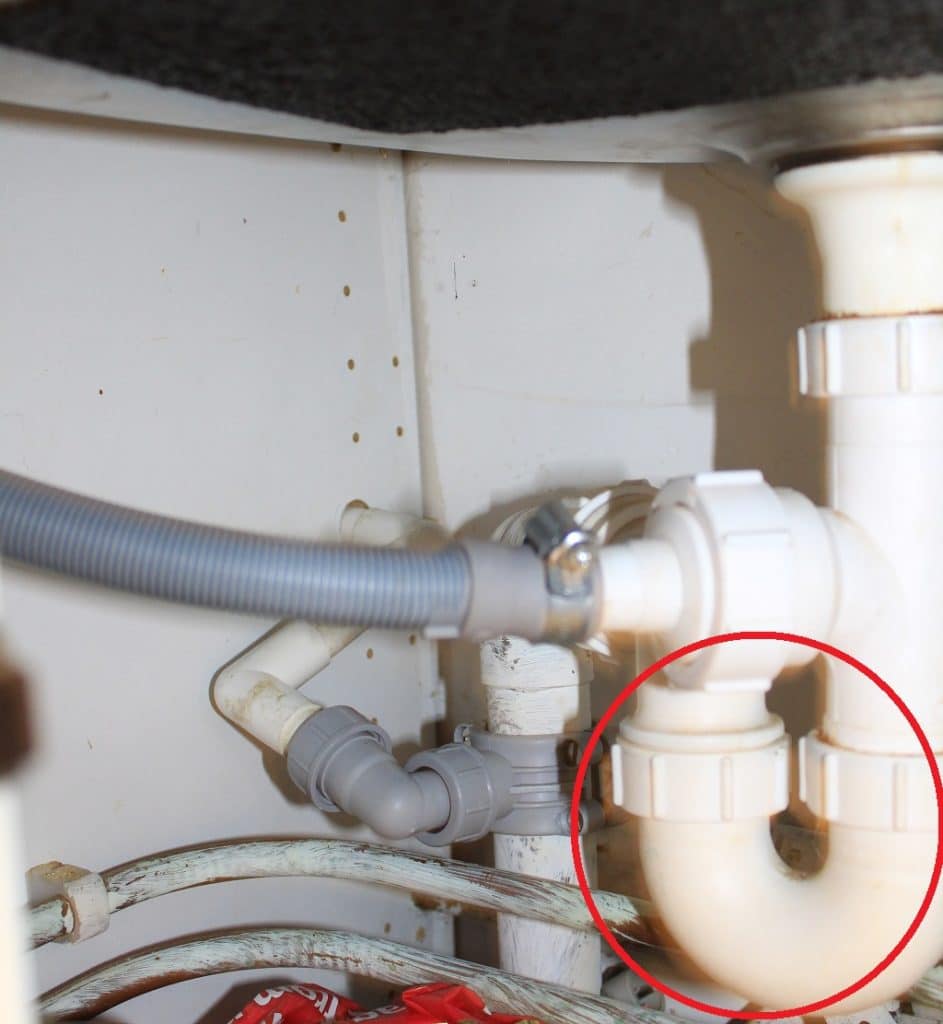 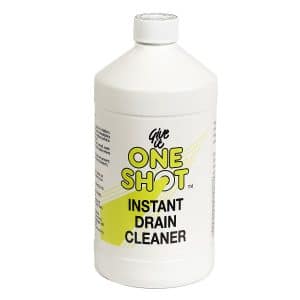 If your toilet, bath, basin, shower or kitchen sink is totally blocked, you can use acid to dissolve the material in the pipe.

We try to avoid deploying this chemical as a first option as it’s extremely caustic and can damage thin plastic and rubber seals.

Also, if you spill it on your skin, you’ll need to clean it thoroughly with water as acid is extremely harmful.

The “One Shot” drain cleaner can be found here.

The roof guttering catches rainwater and usually directs it to an underground soakaway.

In most modern homes, the rainwater shouldn’t enter the same drain as foul waste from the kitchen and bathroom.

Blockages are usually caused by excess roof moss, pine needles, leaves and other debris from the roof such as broken tiles and cement.

If your roof looks anything like this, then no filter or gutter guard system will protect the guttering and pipes from blockages: 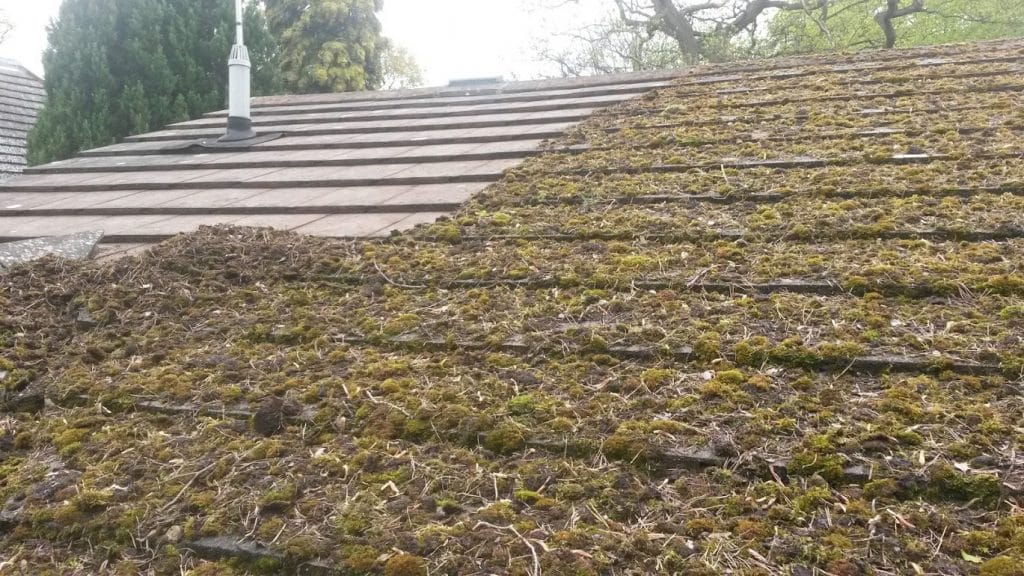 Roof cleaning and moss removal probably aren’t as expensive as you think, this page contains everything you need to know about removing and preventing roof moss.

There are several products you can fit to the roof gutters to keep most leaves and some moss out of the rainwater drains.

The cheapest and easiest to install is a pipe filter like this: 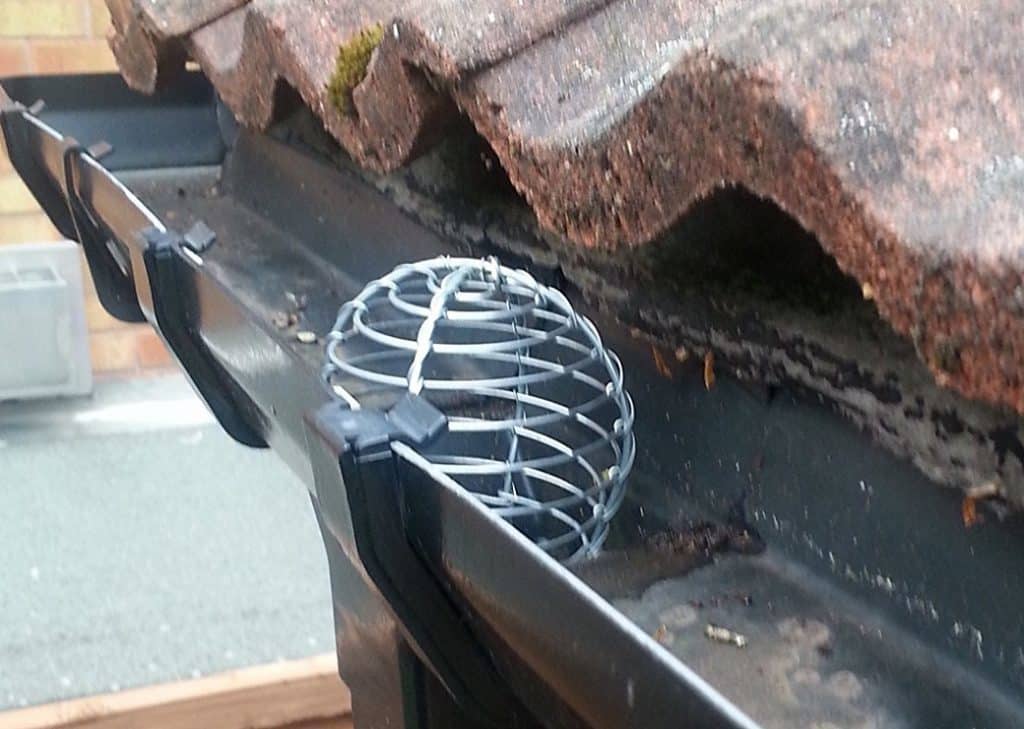 Filter for gutters and pipes. Read reviews of this filter here

Gutter guards also work well at keeping leaves out, although they cost more than pipe filters and take longer to install.

This product can significantly reduce the cost of the gutter maintenance.

These are usually fitted by roofers and gutterers rather than homeowners:

The Gutter Hedgehog. Not perfect but one of the better gutter guards. Can be purchased from Amazon.

Get a Quote From a Pro

If DIY isn’t your strong point, hit the button below to see how we can help:

Cost to Keep a Dog in the UK

The Most Powerful Moss Killing Chemical You Can Buy