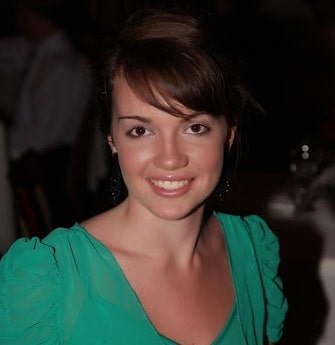 My name is Claire and I created this site with my partner. Our initial aim was to research the prices tradespeople and businesses are charging for home improvement projects.

Since our launch, we’ve also created some helpful guides for specific causes that we’re passionate about.

Two years ago my dad died from mesothelioma; a cancer caused by asbestos exposure whilst working in the construction industry decades ago.

My partner, who previously served with the armed forces also worked in the home improvement sector after leaving the army.

We put our heads together, researched this topic extensively and created this guide for homeowners, renters, DIYers and tradespeople.

What You’ll Get From This Guide

We’ve done research into exactly where and when asbestos products were installed into homes.

With our help, we hope you can easily identify and steer clear of this dangerous material.

While this guide is not intended as an alternative to asbestos analysis testing, it can help you avoid potential asbestos-containing products.

You’ll find photos, descriptions and risks for each of the eight common places to find asbestos in the home.

Did you know that asbestos testing costs less than £35?

You can order a kit online that arrives in a day or two. All you need to do is post a sample back to their lab where they will analyse it, you will get the results online, usually within 48hours.

The last time we checked their prices was in 2021 when it cost £30 for one sample. 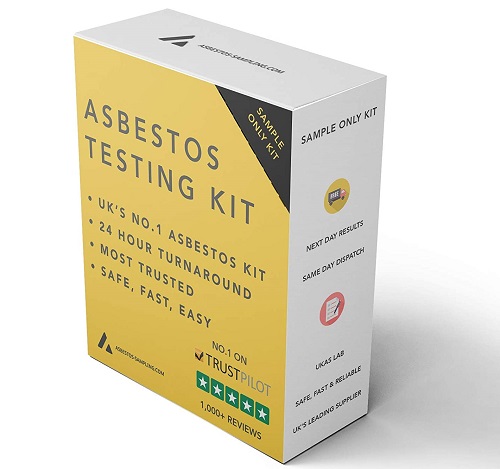 Asbestos – How Many Homes Contain it?

Did you know that a recent survey revealed that over 50% of homes constructed before 1998 contained asbestos products in at least one location?

Asbestos comes in several forms and can be added to other materials such as cement or plaster to harden and heatproof them.

The reason this material was so popular was that it’s cheap to manufacture and easy to work with, it also lasts for hundreds of years as it doesn’t degrade or rot.

But what does asbestos look like and where in the home are you likely to find it? 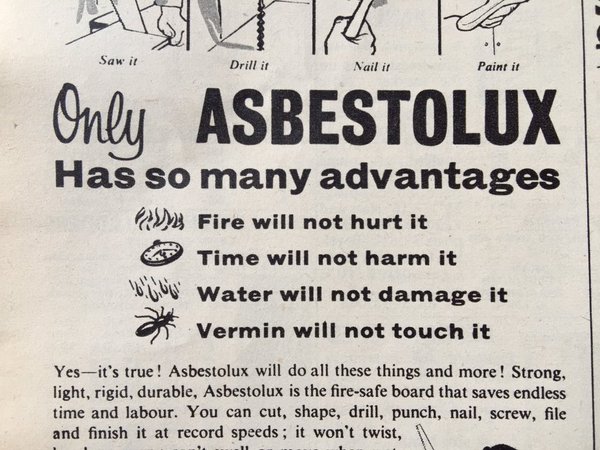 Asbestos was once a very popular material but its use declined from the early 1980’s until 1999 when its sale was finally banned in the UK.

Unfortunately, the latency period for asbestos-related cancers is between 15 and 40 years after exposure.

The chart below was published by the HSE and shows historical deaths and a prediction: 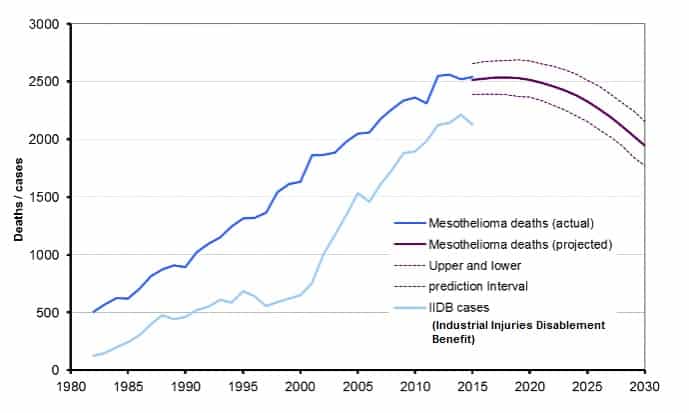 UK Mesothelioma deaths by year. US deaths are even higher. Don’t forget that this is just one type of cancer caused by asbestos.

Here’s our guide to asbestos in the home, we’ll show you photos of each product so you’ll know what it looks like. We’ll also provide a description and details about where you’re most likely to find it.

As a bonus, we’ll also disclose how likely each material is to shed harmful fibres.

This a great resource and could save your life so don’t forget to bookmark this page or share on your favourite social platform. Lots of people don’t know what asbestos looks like and it can be confusing because some safe alternatives look very similar. 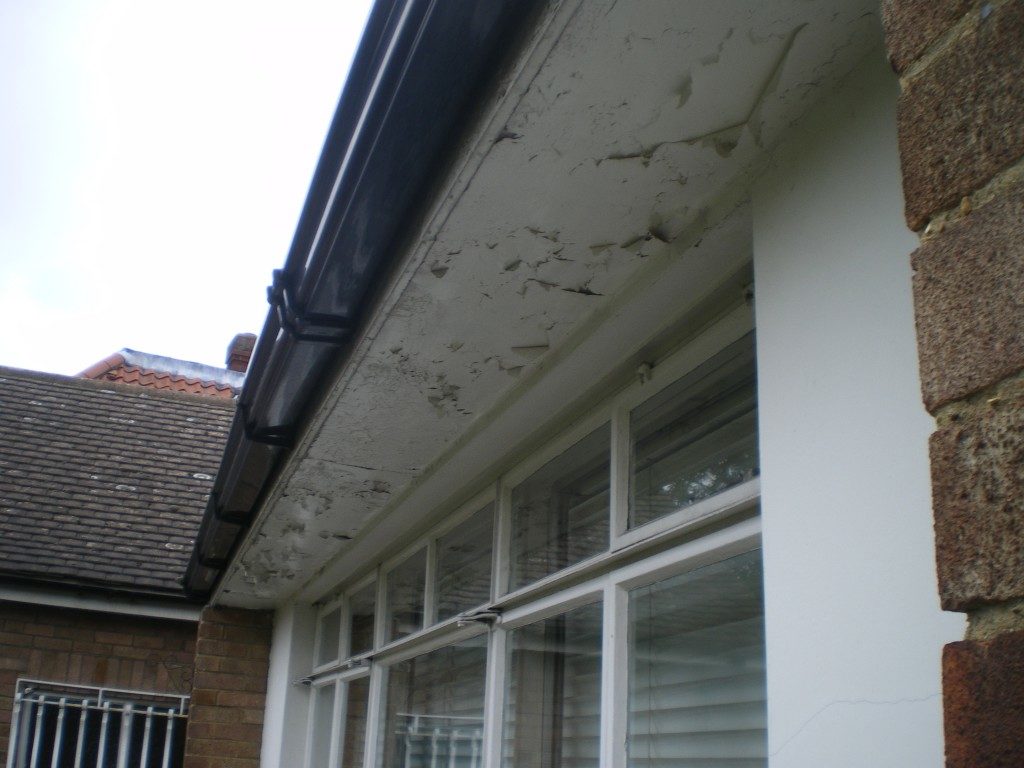 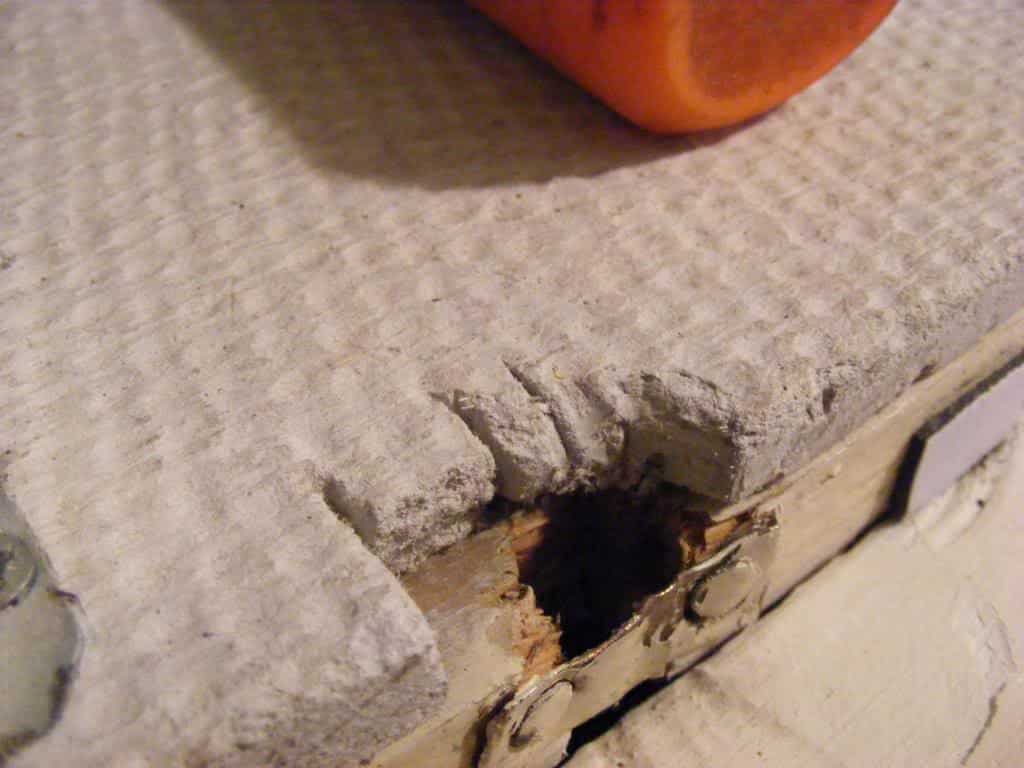 Soffit boards are located on the roofline of many houses and intersect with fascia boards. The photos above show what this type of asbestos looks like.

Nowadays, newly constructed homes are built with Upvc plastic boards or plyboard, but that wasn’t always the case:

Solid wood soffits were popular up to the 1940s.

After the second world war, there was a shortage of certain products such as metal and wood. Thus cheap cement-based products were used as alternatives.

From the early 1980s, thin plyboard gradually replaced asbestos as the preferred choice for soffits, this was, in part, due to the introduction of asbestos control regulations.

The 1990s saw the introduction of Upvc plastics which required less maintenance and lasted longer.

The Risk to You From Asbestos Soffits

Because many homeowners, DIYers and even some tradespeople are unaware that this material is asbestos, there is a genuine risk of them releasing dangerous fibres if:

The reason we have chosen soffits for our #1 slot is that hundreds of thousands of homes still have these boards on their rooflines and previous homeowners may have covered them in layers of paint, which masks the fact that it’s asbestos.

The only good thing to say about asbestos soffits is that they’re located outside, and the dangerous material is mixed with cement, so poses little risk if left undisturbed. 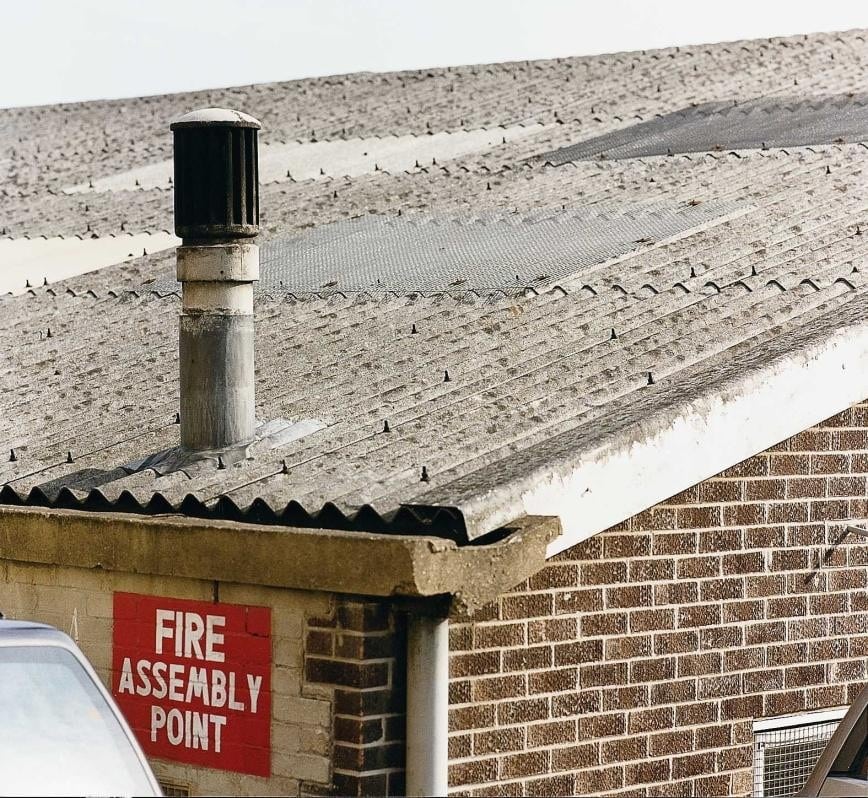 These panels were incredibly popular up to the late 1980s and can be found on millions of shed and garage roofs in the UK., the photo above shows what asbestos on a roof looks like.

They were cheap, easy and quick to install, didn’t catch fire and lasted for hundreds of years.

You’ve probably seen many of these products yourself, they’re found everywhere.

Because they’re found in garages and sheds, there is a risk of fibres accumulating on the floor of the garage/shed, and this is the main risk to you.

As a general rule of thumb, asbestos indoors or in any area that isn’t well ventilated is far more dangerous than asbestos in an open air environment.

We recommend you either call a professional to remove these sheets and replace them with an alternative product or have them sealed so that they won’t leach dangerous fibres.

In 2021 we updated our asbestos removal cost guide, go check it out if you have asbestos sheets on a roof. 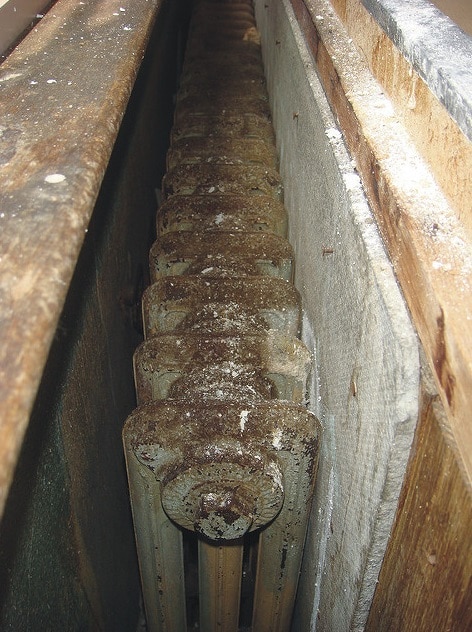 Asbestos has incredible fire and heat proofing properties, it was widely used as brake pads on trains and as a fire barrier on navy ships.

It doesn’t conduct electricity either so can be found near fuse boards and consumer units.

Here are the most common places to find asbestos-containing heat shields in the home:

While these products are often found in the home, they pose little risk if left undisturbed.

Unfortunately, if the home owner or resident doesn’t know that they’re asbestos, they may inadvertently drill, cut or remove them, releasing dangerous fibres into the home.

Small sections of asbestos heat shielding, such as those found behind fuse boxes or chimney breasts, are relatively inexpensive to remove and a professional could complete this work in less than half a day. 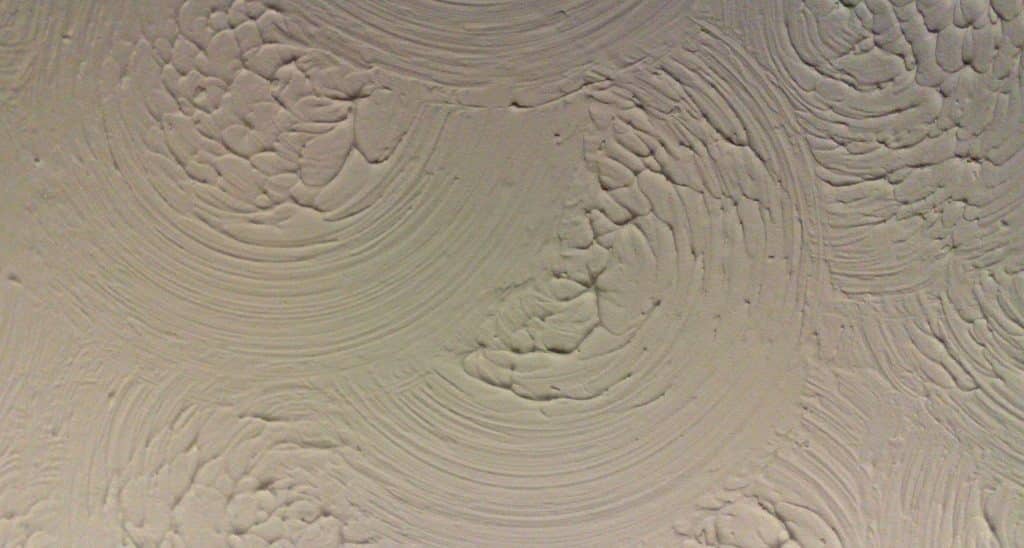 Textured wall and ceiling coatings have been around for decades but became fashionable during the 1970’s and 1980’s.

Asbestos was frequently added to the mixture to make the material firmer and easier to work with.

Because of the fireproofing benefits of asbestos, you often see this stuff on kitchen ceilings.

Asbestos wall coatings are less common, but if you have this material in the ceiling, it’s worth having the walls tested too, especially in areas near sources of heat.

The biggest risk to you is drilling, sanding, cutting or removing this material. This would release a considerable amount of asbestos fibres, so any substantial work must be done by a fully licensed asbestos remover. Low-risk work, such as drilling a hole or two, must be done by unlicensed persons who have completed an asbestos awareness training course.

Because this material is located indoors and often covers the entire ceiling, the risk factor is very high, although many homes have now had their asbestos ceiling removed or safely encapsulated. 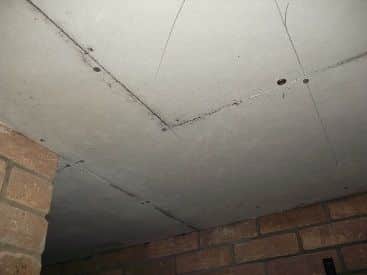 Carports pose a risk to any rooms located above the port, spilt fuel or oil could catch alight, or an engine fault could cause a fire and burn through into the house.

For this reason, building regulations state that fireproofing material should be placed on the ceiling of all carports underneath habitable parts of the home.

As asbestos has incredible heat shielding and fireproofing properties, it was seen as a perfect option for carport fire protection.

Like similar asbestos products, previous homeowners could have painted over them, making it difficult to detect.

The biggest risk is: 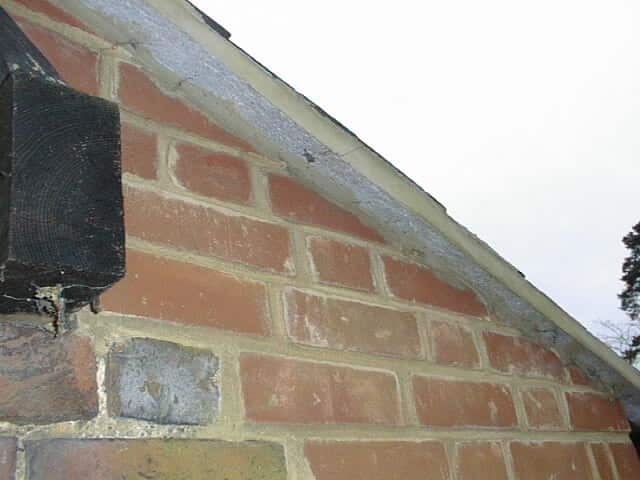 If your property is more than 20 years old and has a gable, the chances are that the cement on the roof edge is supported by an asbestos-containing board called an undercloak.

These asbestos boards are on millions of homes however there’s good and bad news:

The bad news is that these boards look identical to non-asbestos boards that have been used as an alternative for the last 30 years or so. To confirm whether any undercloaks on your home contain asbestos, you would first need to have a sample tested.

The good news is that this asbestos product is found outdoors and as you can see from the photo, is embedded into cement. This type of asbestos is a very low-risk product, although dangerous fibres could be released if it’s disturbed.

While these boards are unlikely to pose a threat, that could change if you: 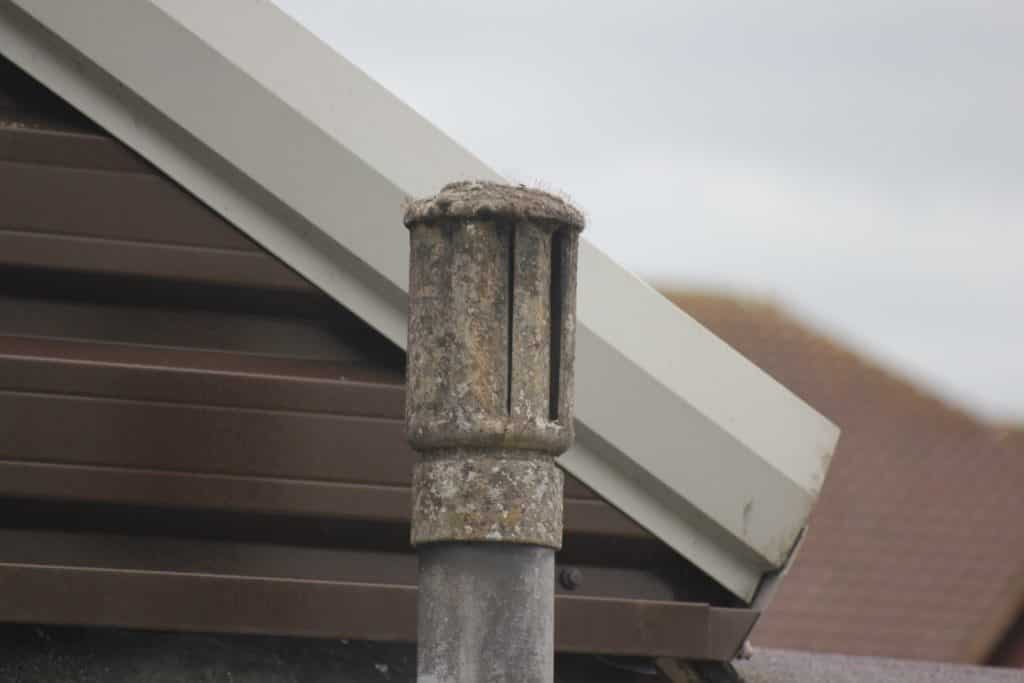 Flues can be found on top of chimneys, on breather pipes for toilet waste systems and even on external outlets or hoods for gas boilers.

They were very popular due to their heat-shielding properties which made them perfect for chimney tops.

The good news is that these flues are always found outside so pose little risk unless disturbed.

They are also easy for a professional or trained person to remove; the main issue is gaining access to them as some chimneys are very high.

On some homes, the entire pipe, from ground level to the roof, is made from asbestos. These are most costly and difficult to remove but are rarely found. 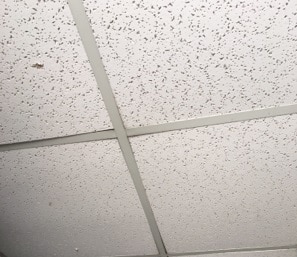 These tiles were used on ceilings and are almost always square or rectangular.

There are two types of asbestos ceiling tiles:

Unfortunately, both types of tile look very similar to non-asbestos alternative products. The only way you can be 100% sure is if you have the tile tested.

Hanging tiles are very easy for a professional to remove, they aren’t fixed with nails or screws so should come in one piece.

Adhered tiles often break apart during the removal process, so a professional may charge more to remove this type of asbestos.

Adhered tiles can be covered with an additional ceiling to box them in; this is a realistic, safe and cost-effective alternative to removing the material.

Many homeowners choose to leave asbestos in place and hire a professional to seal or box it in.

This prevents any harmful fibres from being released and is an attractive option.

Here are some examples:

Garage roof sheets can be sealed by a professional, this sealant lasts up to 25 years and prevents fibres from being released.

Ceiling tiles or Artex can be left in place, and a separate ceiling hung directly below it and finished with a traditional plaster finish.

Soffit boards can be painted by a professional and left in place; they don’t pose any risk if left undisturbed.

Sealing and Encapsulation – An Opposing Viewpoint:

Some homeowners choose to have this material removed rather than seal or encapsulate it because:

When we created this website, we did have a section here revealing how much it costs to remove asbestos. This was based on quotes and feedback from asbestos removal companies.

We recently moved the price guide to two separate pages:

This page has prices for removing asbestos sheets from a garage roof.